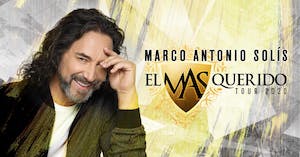 Following the success of his 2019 “El MÁS Querido” tour, one of the most beloved and celebrated figures in Latin music, Marco Antonio Solís, will return to present the second U.S. leg of the tour this spring.

Co-Produced by Live Nation and VIVA, the new leg of “El MÁS Querido” tour will kick off on April 24 at Xcel Energy Center in St. Paul, MN, and will make additional stops in 14 other cities including San Antonio, Tulsa, Boise, Portland and Albuquerque before wrapping up at the Honda Center in Anaheim where he holds the record for most shows with 11 concerts at that venue.

In the summer of 2019, Solís embarked on his successful “El MÁS Querido” tour in the United States, making stops in 16 of the biggest cities in the country and successfully packing a full house at every show, including a historic sold-out at Madison Square Garden in New York City. Solís also made his highly anticipated debut at the legendary Hollywood Bowl in Los Angeles, selling out the iconic theater and delighting 17,000 adoring fans in an unprecedented performance. The 2019 U.S. dates wrapped up with yet another sold-out show at AmericanAirlines Arena in Miami, where he gave fans a night to remember, sharing all of his most beloved hits proving that romantic music never goes out of fashion.

In November, “El Poeta del Siglo” brought his acclaimed tour to Central and South America, performing with breathtaking success in front of over 150,000 fans in sold out shows in Ecuador, Colombia, Aruba, Chile, El Salvador and Guatemala.

On each date of the 2019 “El MÁS Querido” tour, Solís had his two talented daughters, Alison and Marla Solís, by his side, who continue to grow and shine spectacularly as artists in their own right. Performing songs such as “Basta Ya" and "Dónde Estará Mi Primavera" with their father, they received an extraordinary welcome at every show, proving that they carry his incomparable passion, love, and respect for music in their blood as well.