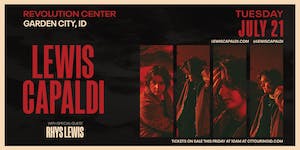 23-year-old Scottish singer-songwriter, Lewis Capaldi’s breakthrough multi-platinum hit “Someone You Loved” has been nominated for a GRAMMY Award in the prestigious Song of the Year category. Following his own sold-out fall headline tour of North America, Lewis will join as a special guest on Niall Horan’s 2020 Nice To Meet Ya world tour. The tour also features fellow label mate FLETCHER and kicks off on April 20, 2020 at in Nashville. After topping the U.K. Official Singles chart for a nearly unprecedented seven weeks, “Someone You Loved” held the No. 1 spot on the Billboard Hot 100 for 3 weeks, marking the first No. 1 single from a debut U.K. artist on the tally since February 2016. Lewis’s debut album, Divinely Uninspired To A Hellish Extent, is the fastest selling U.K. debut of 2019. To date, it has sold over 1.5 million adjusted albums worldwide and combined global streams now exceed 3 billion.